→ The British colonial office established the mainland as a crown colony on August 2, 1858, naming it the Colony of British Columbia.

→ British Columbia joined Confederation on July 20, 1871 and became a province.

“How the map of the United States would look with Canada Annexed” reads the political cartoon above. Interesting to note the names in the different regions.

That same year in 1888 there were reports of native people starving in the Edmonton area. Approximately 3,000 First Nations people starved to death because they were forced off their traditional hunting lands and into reservations. Edgar Dewdney was the Lieutenant-governor of the North West Territories at the time, which included Alberta at the time.

→ Edgar Dewdney was the fifth Lieutenant-Governor of British Columbia and the builder of the Dewdney Trail which is named after him. 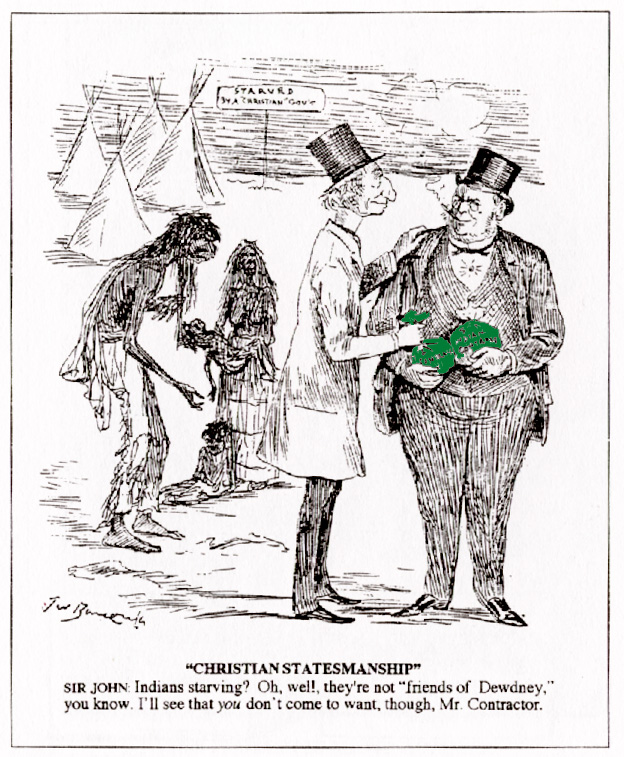 Meat contractors were paid by the government to provide food rations for the First Nation peoples. The meat that was provided was inadequate or tainted. Because the buffalo was virtually extinct, there were no hides to make clothing and therefore, many Natives were in rags and perished in the cold winter as well. This was all part of the government’s plan to ‘clear the land’ and make way for new immigrants.

Twenty years later in 1908 immigration was from Europe was in full swing. Land was being purchased by Europeans and farming communities were established.

In 1908 people feared an Asian Invasion

In January 1908 the federal government decide to retrict immigration from Asia.

The government of the day required immigrants to come directly from their countries of origin by a continuous passage.  At the time there wasn’t a direct steamship which ran from India to Canada, so this law stopped immigration directly from India.

In agreement with Canada, at the time, Japan placed emigration restrictions on their citizens. Also, a tax was placed on all incoming Chinese immigrants.

This political cartoon of the day reads:

“We have here gentlemen positively the last specimen of a white man known to exist in BC. It was captured after great trouble and expense in the interior of the province. If you will listen gentlemen it will now sing a comic song…..Rule Britannia. The sign reads, Homo Albus (white man) at one time very numerous in this province – may still be found east of the Rocky Mountains.”

In 2016 fears of a slowing economy, homelessness and racism are still hot topics.  What does the next 42 years hold for British Columbia?

By the time BC celebrates it’s 200th birthday will the government respect its people?

“Fruits of the Franchise Act 1891
The Dominion election lists are now being revised under an act which discriminates against the poor and industrious and is in every respect iniquitous and tyrannical as well as monstrously expensive. Away
with it and give us manhood suffrage!”

Prior to 1918 only Caucasian men who were property owners had the right to vote.   Excluded were all women, First Nations and members of certain religious denominations. Qualification on the basis of property ownership benefited the Conservative party. So the concept of “one man, one vote” was a long way off.

Prime Minister John A. Macdonald: “I admit I took the money and bribed the electors with it, is there anything wrong about that?”

Comment from The Mail: “We in Canada seem to have lost all idea of justice, honor and integrity”

In 1872 members of the Conservative government accepted money from a Montreal businessman who wanted the contract to build the Canadian Pacific Railway.

When the Liberals made details of the bribes public, Prime Minister Macdonald attempted to delay the investigation of the ‘Pacific Scandal’ by proroguing parliament.

Alexander Mackenzie, the Liberal leader (standing on the left) used the ‘Pacific Scandal’ to help defeat Macdonald in the next election.

Sir John Alexander Macdonald was the first Prime Minister of Canada from 1867–1873.  Macdonald lost the 1873 election to Mackenzie. Then he was re-elected in 1878 and remained an elected official until 1891.

Is there a similar scandal that could bring down the current prime minister?

It wasn’t until around 1974 that both men and women received the same minimum wage of $1.80 to $2.00 depending on which province you lived.

On Saturday April 5th, Vancouver Island Symphony will play musical pieces chosen by the audience in an evening titled, ‘Nanaimo Home’. Wouldn’t it be great to hear the Vancouver Island Waltz?

William K. Horne composed the “Vancouver Island Waltz” in 1860; probably the first music of its type composed locally. It is preserved at the Provincial Archives of British Columbia, but it has never been played by an orchestra in recent times.

Horne was Assistant Paymaster of HMS Ganges, the flagship of Rear Admiral Robert L. Baynes. Ganges Harbour on Saltspring Island is named after the ship.  Fulford Harbour is named after Captain John Fulford, the master of the HMS Ganges. Originally, Saltspring was to be named Admiral Island in honour of Admiral Baynes, instead, he is remembered in Baynes Peak at the top of Mt. Maxwell.

The British Royal Navy was based in Esquimalt, which was known as the Pacific Station; its headquarters on the west coast.  Previously, the Royal Navy had been based at Valparaiso, Chile, but after the Crimean war, Britain became concerned with Russia’s ports in the north Pacific and Esquimalt had a deep harbour well-suited to sailing ships.

Between 1857 and 1863, the Royal Navy surveyed and charted not only the border region between the Gulf Islands and the San Juans, but the entire coastline of Vancouver Island, the Strait of Georgia, and parts of Haida Gwaii and the mainland coast, including Burrard Inlet, Howe Sound, Jervis Inlet, Bute Inlet, and the Fraser River as far as Fort Langley.

As a result, there are many place names of crew members and their ships including Browning, Bedwell, Blunden and Gowlland Harbours; Campbell River, Mayne Island, Brockton Point, Pender Island, Plumper Sound, and Hecate Strait.

The presence of the Royal Navy was an economic and social boost to the town of Victoria. Many of the members played musical instruments and took part in theatre productions, and they were always present at government dances.

In Nanaimo’s south end there are some landmarks named after the early politian and merchant Mr. J.J. Southgate.  Born and raised in England, Joseph Johnson Southgate came to Victoria in 1859 from San Francisco.

From 1860-1863, he was a member of the Legislative Assembly of Vancouver Island, representing Salt Spring Island. Later he was the elected representative for Nanaimo. In 1864 he was president of the newly formed Vancouver Club.

It wasn’t uncommon for politicians of the day to mix political and business interests. In the same year that the Harewood Mine opened, J.J. Southgate put forward a request in the Legislative Assembly for Vancouver Island:

“A letter was read from Messrs. J. J. Southgate and Sebright Green, Directors of the Harewood Railway Company Limited, dated 10th June 1864 requesting the consent of the Governor to their taking land in the Government Reserve in the Nanaimo District for the purposes of their proposed Railway.

The Council were of opinion that the Harewood Railway Company might be  permitted to take the land necessary for their line of Railway across the unsold portion of the land situated on the Government Reserve opposite Newcastle Island in the District of Nanaimo upon the same terms that are provided by the Vancouver Island Land Clauses Consolidation Act 1863 with regard to the land of private persons.”

After the Colony of Vancouver Island merged with that of British Columbia in 1866, J.J. Southgate served as the elected member for Nanaimo. He was also a keen supporter of Confederation and was honoured with several geographical features named after him.