by William A. White and Andrew Cienski

The Coast Salish nobility blanket, is called swuqw’alh in Hul’q’umi’num’ and in SENĆOŦEN (Saanich language). The swuqw’alh is a blanket woven mostly from mountain goat wool. It was a very important part of traditional economic and ceremonial life of Coast Salish nations. In order to make the blankets men and women had to combine their efforts to collect the wool, trade, make tools, spin, and weave. For the most part, they were made by and for si’em. Si’em refers to noble, influential or rich people. Swuwqw’alh (the plural form of swuqw’alh) had many roles in traditional life; they were used for ceremonies, as currency, as potlatch gifts, as payment of ceremonial workers, and as dowries. Swuwqw’alh were usually about 5 or 6 feet long, but larger blankets were used as screens for memorials to conceal masked dancers before they emerged onto the fields in front of the longhouses.

The photograph above shows a delegation of Chiefs led by Chief Joe Capilano in 1906. In the photo, the si’em were leaving to meet with the King of Britain, Edward VII. Like many of our Coast Salish relatives throughout the entire region, leaders were concerned about the loss of land and resources. In preparation to meet with King Edward to discuss land issues, all wore headgear and swuwqw’alh. To wear a swuqw’alh shows that the wearer is someone of authority, someone who can speak for the people. On a spiritual or ceremonial level, swuwqw’alh protect the wearer and provide strength to their speech.

Traditions associated with swuwqw’alh are very old. The oldest spindle whorl for spinning wool into yarn dates back approximately 1200 years.2  But our ancestors have been around and fully using natural and supernatural resources for at least 10,000 years. Over all these thousands of years, our history, prayers, songs, knowledge and skills have been handed down through the generations in an oral art form that carries much detail about the land and the movements of families. For example, our Flood stories contain details about how the Flood occurred. Scientists such as geologists find evidence that proves the accuracy of these stories.3  Even the Supreme Court of Canada accepts oral history as evidence in the courts.

These in part are why shqwi’qwul (hired speakers) and sul’eluhw (Elders) often say, “Hwiyunem’ ch tthu sqwal tun’ si’em!” (“Listen to what your nobles say”). This was a common way to begin lessons on our history and rules for treating each other well. Our ancestors named villages, places to hunt, to fish, to gather all kinds of food, and to ritually prepare themselves for ceremonies throughout our territory.

The main tools for creating swuwqw’alh are the sul’sul’tun, or spindle whorl for spinning  wool into yarn, and the ’uyumun, or loom for weaving. The tools were made by men for women to use.

Sul’sul’tun are often engraved with stl’eluqum, supernatural creatures which lend spiritual energy to the wool. The image is carved in such a way that when the whorl spins, the  image on it appears to change and move. This way of carving is the basis for today’s Coast Salish art.

When we think about the powers associated with singers, dancers and those who use masks and rattles today, it should not be a surprise that the sul’sul’tun are understood to imbue the wool with power, and that the blanket strengthens and protects its wearer.

After his work with our sul’eluhw throughout the Coast Salish region, Northwest Washington State and Southwest British Columbia, the anthropologist Wayne Suttles learned our people understood that all of our ceremonial and ritual obligations reinforced four sources of power and prestige. These consisted of vision, application of the ritual word, knowledge that songs and teachings flowed from the ancestors, and visible wealth
associated with sacred implements, teachings etc. Talk too would be considered as sacred.

It is for this reason that our Sul’eluhw told us “La’lum’uthut, Be careful what you say, for words too have power!”

The carving of ritual objects, including house posts, sul’sul’tun, and shulmuhwtsus rattles are clearly connected to the teachings of the Creator. These teachings are reflected in stories and rules handed down by the Ancestors and consistent with the statement that, “almost every action in Northwestern life was connected with spirit power” (Underhill, 1945). Our Ancestors knew ritual, ceremonial and community functions represented the basis for our hardest work, greatest self control, and an astounding belief in our own abilities and of course a reliance on one another to protect and surround one another with support. These teachings are at least 10,000 years old and are tied to our use of the land, the seas and our Ancestors’ knowledge.

Swuwqw’alh are made of mountain goat wool. In the old days island people added wool from a special breed of dog which is now extinct. Mountain goat wool was scarce and since there are no mountain goats on the islands, island nations had to trade for the wool. Among other things, they would trade with the wool they harvested from their unique breed of dog.

Coast Salish aristocracy rarely used the blankets as bed covers. More commonly they were used to purchase goods or as gifts to guests when attending memorials, initiations, naming ceremonies, to pay ritualist for their services, or as formal wear.

When men carved the sul’sul’tun and when women worked with the wool, it was different than how we go to work today. There was a strong spiritual component.

Before handling the treasured goat wool the weaver underwent ritual purification. Normally, it took a woman a month to weave the blanket and during this period, as it is with other specialists working with sacred materials, she was celibate. The prayers and songs women used during the month-long weaving process ensured ancestral energy strengthened the garment.

Images carved on the sul’sul’tun reflected her particular guardian spirit or that of the person who carved it. The photograph above, a pre-1900 sul’sul’tun, depicts a thunder-bird in flight. The carved image when used by the weaver who, with her focus through prayers, songs, and words, ensured the wool she prepared for the swuqw’alh would have the power of their ancestry.

She transformed raw material into objects of great wealth and power, and because of that she was highly respected. Her training to weave blankets, spin wool, create and collect materials for making baskets began when she was a young child. She and her brothers and cousins, influenced by sul’eluhw, were “taught to obey their parents, to respect the aged, to be silent in the presence of their elders, and to show kindness toward their fellows.” (E.S. Curtis, 1913).

The white nobility blankets, swuwqw’alh, were used as currency and proof of high status. In this regard swuqw’alh, as a wealth item, were also used by a potential husband to prove his ability to provide for and respect his intended wife, and represented visible proof of his status.

Edward Curtis (1913) gives an account of a Coast Salish marriage prior to 1900. He explains when a young man expresses interest in a Nobleman’s’ daughter his request was usually rejected initially.

The young man, swiw’lus, would then show his commitment by sitting outside the entrance to their longhouse for days, even without food or water. Eventually, seeing his commitment the father, or si’em, would invite the suitor inside. The swiw’lus would then gift him with proof of his status and ability to care for his bride – and brought swuwqw’alh and other valuables such as canoes or slaves.

To validate the union, as she left the village to live with her husband, the people of the village lined the path along the beach with blankets so her feet never touched the ground. Thus the marriage ceremony entailed her leaving her parents village by walking on swuwqw’alh. She sat in the canoe that would take her to her husbands’ home and her family would pile swuwqw’alh around her. The piles around her grew so high all you could see was her head above the blankets. These exchanges are powerful examples of the importance of si’em slheni’ (noble woman) to the village. This was often referred to as a Bride Price and identified the great value associated with women in our culture.

Canoes, dentalium shells, sea otter, bear skins and other items also represented major wealth and or trade items. They represented currency to either buy or exchange goods. For example, one goat wool swuqw’alh cost about a thousand dentalium shells. The Quinalt young girl in the photo above is wearing a dentalium shell headdress.

Ocean-going canoes represented a major investment and required five blankets, a deerskin shirt and a fathom of dentalium shells (Curtis 1913). The value of all of these things are important because for thousands of years before the coming of the Hwulunitum (White people), all of these items represented currency. They clearly reflected a family’s wealth.

Sul’sul’tun made by men and used by women with associated songs and prayers, all focused by her solitude and training. This brought immense power to their work. All of this combined economic commitment; personal time, effort and creativity; ancestral and spiritual knowledge; and traditional songs, prayers and skills. It would have been impossible to create these economically and ceremonially valuable swuwqw’alh without the contributions of countless generations of women, sul’eluhw, and their families. It is for these reasons, the old people said, “Hwiyunem’ ch tthu sqwal tun’ si’em!” 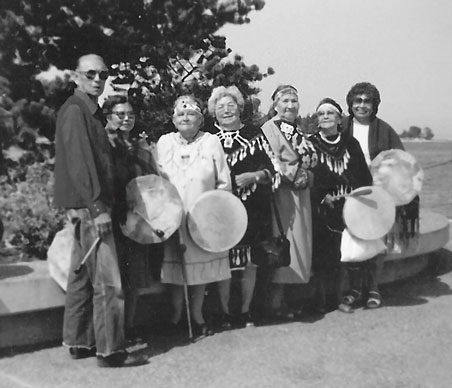 1 Based on a paper researched and written for the Pauquachin FN Nobility Blanket Class. W. White and A. Cienski, 2006.

About the Authors:
Andrew Cienski recently completed his Masters Degree in Linguistics from the University of Victoria.  He and William A. White, (History and Anthropology – UVic) have worked with several of the most significant Elders in the Salish region (including Dr. Samuel Sam, OC., Agnes Pierre and Katherine George). That work formed the basis for capturing the teachings of the old people. Since then, both have undertaken research projects for the Pauquachin, Esquimalt and Cowichan First Nations.

Bernick, E. Johnson and K. The Hands of Our Ancestors: The Revival of Salish weaving at Musqueam Vancouver, UBC 1987

Crosby, Thomas. Among the Anko-me-nums of the Pacific Coast. Toronto, William Briggs. 1907

Underhill Ruth. Among the Anko-me-num of the Pacific Coast Sherman Institute Press, 1945