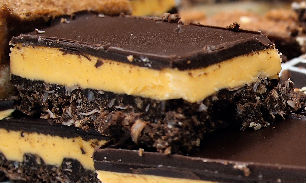 How did this three-layer dessert, with a bottom layer of unbaked graham wafer crumbs and coconut, a filling of custard-flavoured butter icing, and then a final layer of dark chocolate, get named after Nanaimo? And how did it become so well known? In 2006, the Nanaimo Bar was voted as Canada’s favourite confection.

Baking in the Fifties
After World War II, recipes for sweet unbaked desserts such as refrigerator squares became widespread when butter and sugar was once more available. By 1950, ingredients such as marshmallows, sweetened condensed milk, and crumbled cookies became well-used. This era also saw confections made with brands such as Bird’s custard powder, Baker’s chocolate, Fry’s cocoa, and Tropic coconut.

Edith Adams names the bar
Edith Adams was a fictional character who dispensed homemaker tips and recipes. Her regular columns appeared in the Vancouver Sun and were widely influential. The column also provided a forum for readers to submit their own recipes as well. It was the Edith Adams column that spawned the creation of the Nanaimo Bar.

Two recipes were found for what is the bottom layer of the Nanaimo bar. On April 18, 1947, Mrs. Lois Light of Vancouver submitted a Chocolate Quickie Square, and on February 21, 1948, Jean Haines of Wildwood (north of Powell River) submitted a recipe for Unbaked Chocolate Cake she claimed was from New Zealand. This recipe was reproduced in the 12th Edith Adams Prize cookbook.

One can imagine someone experimenting in a Nanaimo kitchen. The bottom layer was good, but the rest needed to be something different. Ideas were shared and squares were tasted. At last, the women of the Nanaimo Hospital Auxiliary invented a new frosting, and capped the dessert with chocolate.

The first known recipe for Nanaimo Bars was submitted by Mrs. E. MacDougall for the 1952 Nanaimo Hospital Auxiliary cookbook. She called it ‘Chocolate Slice’ and it was very close to the modern bar. Included in that cookbook were two other variations which were somewhat similar and both were called ‘Chocolate Square’. 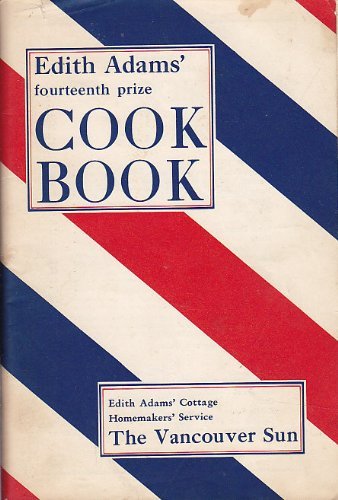 On April 11, 1953, the recipe appears in the Vancouver Sun as the ‘London Fog Bar’ submitted by Mrs. David Orr which was identical to the one in the Nanaimo Hospital Auxiliary cookbook. Perhaps, after seeing their recipe labelled as the ‘London Fog’ Bar, the good ladies of the Nanaimo Hospital Auxiliary wrote to Edith Adams to set the record straight. It was Edith Adams who gave the name ‘Nanaimo Bar’ in recognition. The recipe for Nanaimo Bars appeared later that year in the 14th Edith Adams Cookbook.

As the recipe was passed around, it gained different names. They were called Victoria Specials in Drumheller, Mabel’s Squares in Nova Scotia, and New York Slices in Winnipeg and Kenora.

The Lazy Gourmet in Vancouver claims to have been the first place to sell Nanaimo Bars commercially. Susan Mendleson, co-founder of the Lazy Gourmet, and a regular contributor to CBC, was in charge of writing the cookbook for Expo ’86, and she included three recipes for the bars.

Many believe that this cookbook which promoted regional cuisine from around British Columbia, really put Nanaimo Bars on the map. It was after this that the City of Nanaimo held a contest to find the best Nanaimo bar recipe. Joyce Hardcastle won with a recipe that you can still find on the City’s website as well as a Nanaimo Bar trail.