Each year, seismologists with the Geological Survey of Canada record and locate more than 1000 earthquakes in western Canada. The earth’s crust is made up of plates that  can either slide past one another, collide, or diverge (move apart). The west coast of Canada is one of the few areas in the world where all three of these types of plate movements take place, resulting in significant earthquake activity. 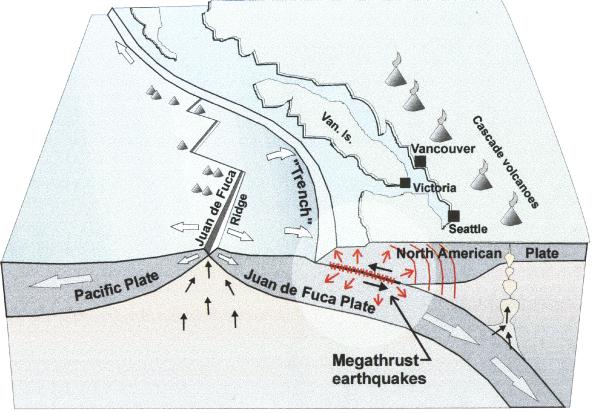 The shaking was so severe on the Haida Gwaii that cows were knocked off their feet, and a geologist with the Geological Survey of Canada working on the north end of Graham Island could not stand up.

Chimneys toppled, and an oil tank at Cumshewa Inlet collapsed. In Terrace, on the adjacent mainland, cars were bounced around, and standing on the street was described as “like being on the heaving deck of a ship at sea”. In Prince Rupert, windows were shattered and buildings swayed.

West of Vancouver Island, and extending from the north tip of the Island to northern California, the oceanic Juan de Fuca plate is moving towards North America at about 2-5 cm/year. This region is called the Cascadia subduction zone.

Here, the much smaller Juan de Fuca plate is sliding (subducting) beneath the continent (it is about 45 km beneath Victoria, and about 70 km beneath Vancouver). The ocean plate is not always moving though.

There is good evidence that the Juan de Fuca and North America plates are currently locked together, causing strain to build up in the earth’s crust.

It is this squeezing of the crust that causes the 1000 or so small earthquakes that are located in southwestern British Columbia each year, and the less-frequent (once per decade, on average, damaging crustal earthquakes (e.g., a magnitude 7.3 earthquake on central Vancouver Island in 1946).

At some time in the future, these plates will snap loose, generating a huge offshore “subduction” earthquake – one similar to the 1964 M=9.2 Alaska earthquake, or the 1960 M=9.5 Chile earthquake. Current crustal deformation measurements in this area provide evidence for this model. Geological evidence also indicates that huge subduction earthquakes have struck this coast every 300-800 years.

Earthquakes in Canada for the past 30 days