“Taboo Dan” as he is known on Tiki forums is an avid collector of all things Tiki and in 2008 he bought a postcard at an antique show that enticed him to learn more about the past of the Diner’s Rendezvous restaurant in Nanaimo.  Here is Dan’s story:

Grab yourself a drink…. oh….. you have one already!! Perfect!

The following photo is the first card I found of a restaurant that was once located on Vancouver Island in Nanaimo, BC. It was called “The Diners Rendezvous” and was situated in the heart of Nanaimo. 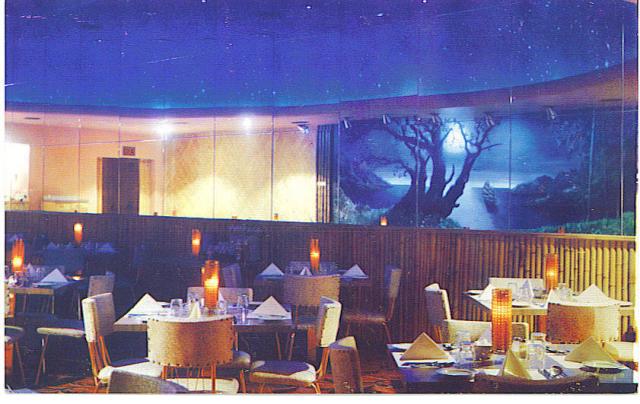 I was going through a large stack of cards when I noticed this one. It looked kind of cool with it’s 60′s looking decor, nice mural and bamboo on the wall. I didn’t notice at first, but it was actually a mirrored wall with bamboo below the mirrors and what looked to be a reflection of a night sky.

The back of the card reads: “Air conditioned dining lounges and coffee shop. Dine under the stars or in our Pagoda Lounge and enjoy Delicious Canadian and authentic Chinese cuisine. Located in the heart of downtown Nanaimo, BC, next to the City Hall.” Only one of my cards was mailed and I can not make out the date. It does look like 1959 but can’t be sure. Strange that none of the three cards that I have had an address for this restaurant on them. I had to do a search and managed to track it down.

The next card sealed the deal for me. I wasn’t sure about even buying the first card as I kind of gotta be specific with what I buy these days and couldn’t make up my mind. This second was in the same stack of mixed postcards at an antique show earlier in 2008. 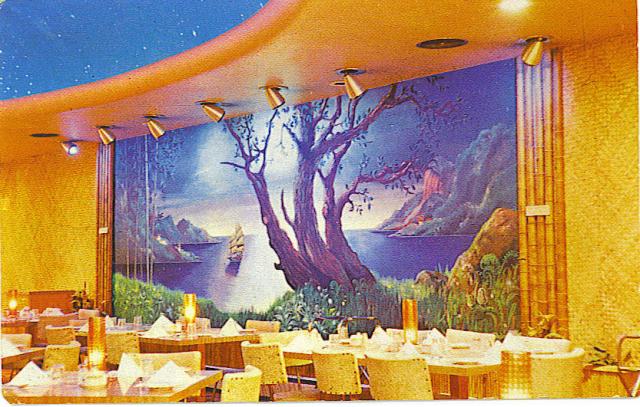 Look familiar to anyone?? How about the Waldorf Hotel??  Tahitian Lounge anyone?? The curved room with the bamboo bar and mirrors on the wall! It was pretty much bang on!!

You can see this photo much clearer and see the details. This photo is actually of the wall with the mural as opposed to a photo of the reflection in the mirror as the first card. You can see a really cool Nite time scene of an old tree, moon lite, tropical foliage, and a Chinese looking ‘Junk’ sailing in the water. About five pieces of thick bamboo line either side of the mural with matting on the walls and all under a awesome looking curved ceiling with a Nite sky painted on it and complete with twinkling lights!! You can also see how the ceiling curves up and out just like the Waldorf Hotel and the way their sky was done.

In this shot you get much more of a feel for the restaurant and the whole theme. Pretty nice looking place! I found out that this restaurant opened in 1956!
That is one year after the Waldorf opened up it’s Polynesian Rooms!!

Here is a little information I did find out about the building itself:

“The Brumpton Block is a two-storey Edwardian Commercial style building in the downtown core. The historic place is confined to the building footprint.

Designed and built by local contractor James Green in 1912, this horizontally proportioned block is a very good example of a vernacular Edwardian Commercial style building. The second floor retains its original appearance. The ground floor originally had four separate storefronts and a central entry to the top floor but was later converted to use as a single restaurant.

The alterations, which included using mosaic tile as cladding on the exterior, were designed by the Nanaimo firm of McArravy & Barley in 1956 and are a good expression of the building’s aesthetic evolution over time and the trend towards stylistic modernization prevalent at the time.

The Brumpton Block is also significant because of its association with two well known and prolific Nanaimo builder-architects. Green was active in Nanaimo in the 1920s and 1930s and is best remembered for Beban House. McArravy, a formally trained architect, designed many notable buildings including City Hall and the Fitzwilliam Street Library building. A neighbourhood landmark, the Brumpton Block’s long facade is very prominent on the street.”

Editor’s note: This is not a paid promotion of  The Diner’s Rendezvous. Word on the street is The Diner’s Rendevous will once again open its doors in May 2010.  Peter Ertsos, who formerly ran the Acme Restaurant, plans to start it up; maybe dining under the stars will soon be here again.