by William A. White and Andrew Cienski

“Oh you big storm, don’t you drown us; you are so strong and we are so weak; don’t you make such a rough sea. Why should we go down? We are all dirty, our clothes are dirty, if you take us down we shall dirty your clear waters, they are so clear and blue. Don’t have us dirty your beautiful waters.”

The year is 1827 and Sye‟yu, relatives, from Nanoose to Saanich traveled regularly to their camps among the Gulf Islands and across to the Fraser River to harvest berries/lhumtst, fish for salmon/tseelhtun and of course to visit with friends and relatives, sye‟yu.

That year, 400 Snenaymuxw travelled by canoe to their summer village just below old Ft. Langley. Many canoes, like the one shown, travelled to Lulu Island and other sites up the Fraser River for the annual salmon harvest. The same year about 1500 relatives from Cowichan and Chemainus settled on Lulu Island to gather food supplies.

Life was not easy and in order to travel from one place to another they had to be really organized and in great shape. Dried fish, clams would have been carried for these trips and of course they had at least three cedar bark bailers/lhultun , to ensure water did not rise up too far. It was hard work/thi syays. Siye”yu who travelled to potlatches up and down the Island or along the Fraser River visited/nets”uw”txwum, for maybe two, maybe three days: ni”tsexwi yusel”u (2) ni”tsexwi lhihw (3) skweyul.

Families who traveled to potlatches up and down the island or along the Fraser River stayed for at least two or three days. In 1828, five hundred canoes carrying relatives and friends from Cowichan passed by Ft. Langley on their way back to the island. They too went there to harvest salmon.

Our ancestors grew up during a time when the world and everything in it was ours! Imagine there was no Safeway, Starbucks, bingo halls, cellphones, restaurants, licences to fish, BC Ferries or highways. Long and short trips required families travelling together on ocean going canoes, assisted by sails.

Marriages amongst noble families/siem were arranged throughout the Coast Salish region as far south as Lummi Washington and as far north as Cape Mudge. This was to allow access to resources, peaceful relations, songs and ceremonies of other noble families.

As long as 15 generations before our time, families blessed and protected each other in our longhouses and villages. The main village site for our ancestors to celebrate naming, memorials, etc. was at Stliil nup/Departure Bay village. Gathering seafood, hunting, gathering berries was essential for living and for feeding relatives and friends for our own sustenance as well as to fulfill cultural obligations. We still do that today!

“EE-eye huh?” (good huh?) The late Anderson Tommy said that after talking about and singing a song heard when he was a child living in Stliinup/Departure Bay! Stliil nup was the main winter village site for the Sneneymuxw. 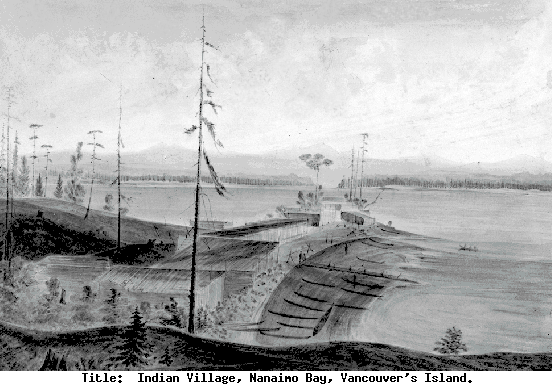 Who do you know who continues to hunt fish, deer, elk, gather berries and to fish and or clam dig? Back to the story.

On this trip, the wind is blowing: stsus/a strong wind from the north west. The cold waves spray into their faces as this family strains to make it across the strait. The men pull with all of their strength. Ni‟ kw‟amkw‟um tthu t‟eluw‟s, their arms were strong, and their hands hard after years of canoeing these waters.

This is one of those occasions when everybody has a job and everyone has to work together. Fathers and brothers paddled, and paddled and paddled some more! The rest of the family bail the water that threatens to sink the canoe. Looking closely at the photo one of the most important tools is a cedar bark bailer. It is likely before leaving shore everyone asked where the bailer was?

The oldest would recite a prayer/ st‟iw‟i‟ulh, calling on the Xe‟els to protect and perhaps more importantly to stop the wind. To our ancestors this was required, prayers and or songs, as a way of living the teachings associated with being strong. They have faced all kinds of weather together. And this is the reason their parents and grandparents told them all the while they were growing up to be strong/ kw‟amkw‟um, and to help one another.

Ts‟ewut means help someone or something. Ts‟ewutul‟ means to help one another. On this trip and many others they will make it through relying on one another. Families moved to several sites throughout the season and returned home during the winter for dances and ceremonies.

Stinging nettles, t‟thuxt‟thux, harvested during the summer with the outer bark removed and dried would be woven together to make fish nets during the winter. Everyone grew up with their own responsibilites.

Children grew up knowing they were loved, had a special place in our families and learned from a very early age to help others. And this is the reason their parents and grandparents told them all the while they were growing up to be strong/ kw‟amkw‟um, and to help one another.

For at least 12 generations and more, our parents, grandparents, great grandparents etc. taught us the importance of helping one another, moving together as a family etc. They did this each time a lesson was to be taught. The oldest because of their great experiences and skills had the most to say. Children were taught to listen intently and not to interrupt.

More stories and history of our families became even more important when families prepared to work in the bighouse or to attend community meetings. They knew these things would make stronger families.

These things are true of our families today. I yas eye un Suli/May you be happy and in good spirits!

One of the first Europeans to visit Snuneymuxw homelands was the Spanish in 1792, a mere forty-five years before this story. If you look closely, you will notice the use of cedar bark hats and capes. These were to protect themselves from rain.

This image was made during their visit across from our main villages, on what we now know as Gabriola Island. In that area was a fishing camp called Hau‟tluks, a main camp site called Thiith‟hkuksen, a major village site called Tl‟eyelth and a burial island called Malekwa. After their arrival significant diseases swept throughout our villages.

Endnote: if our people had a different way of pronouncing or writing halkomelem terms – this is a good time to ask and to learn!

About the Authors:
Andrew Cienski recently completed his Masters Degree in Linguistics from the University of Victoria. He and Bill White, (History and Anthropology – UVic) have worked with several of the most significant Elders in the Salish region (including Dr. Samuel Sam, OC., Agnes Pierre and Katherine George). That work formed the basis for capturing the teachings of the old people. Since then, both have undertaken research projects for the Pauquachin, Esquimalt and Cowichan First Nations. Rita George-Greene is a talented Coast Salish artist who holds a BFA from the University of Victoria. She is currently taking a Child and Youth Care Certificate at VIU. Bill and Rita grew up in Sneyneymuxw. This is the second article all three have collaborated on.